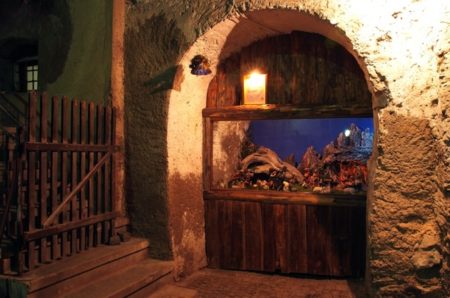 At the beginning of the Nineties, the full-scale Christmas crib was set in a characteristic ‘court’ of the town, because of the impracticability of the square where, for years, it has been located. With the dialect word ‘court’ they indicate the covered passageways, which were in the historic centre and, more in general, the tortuous alleyways and the modest irregular wide stretches, which opens among the houses in the old part of the town.

Certainly this solution contributed to make ripe, within the association, the idea to urge Tesero’s families to bring their traditional Christmas cribs out of their houses and to set them in the ‘court’, giving the possibility to everyone to look up to them.

So, in December 1987, it started the successful venture of “Christmas cribs in the court”. This was possible, thanks to a large and generous adhesion by inhabitants, who made the artefacts of their families available and opened their cattle sheds and cellars in the more evocative corners of the town. Here, they found appropriate and, sometimes, odd location, thanks to the intervention of volunteers coming from the promoting group. 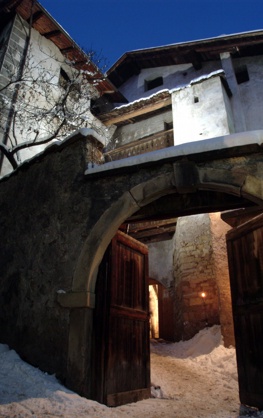 A revived passion for the Christmas crib and a gradual diffusion of a new sensibility towards the past, also promoted by this and others ventures of the association, made possible to get back some pieces, which were put aside, and to create new works, which increased a heritage of culture and art, which the town is more conscious about, now.

Among the Christmas cribs created recently, the most part are set with statuettes made of natural or painted wood.

Professional sculptors make these artefacts, but partly, as in the past, amateur carvers create them, driven by the same spirit inspiring old artists.

During the Festive Season, Tesero, is filled with a traditional atmosphere that goes back to the 18th century. The centre of the village, with its fascinating sites and charming architectural features that are unique in terms of their particular style and preservation is transformed into the characteristic setting of the event “Tesero e i suoi Presepi” (Tesero and Its Nativity Scenes).  The terraced houses, the archways and narrow streets, the small openings and the courtyards of the houses, as well as the stables and cellars all seem to form part of a single, large nativity scene.

The big Christmas crib and the marked path along the historic centre show a lot of Christmas cribs scattered in the ‘courts’. In added then, may be visited in Jellici House an exhibition of considerable interest on the theme of Nativity.

The big Crib
The Association
Exhibitions
The tradition