A tradition, which could die out 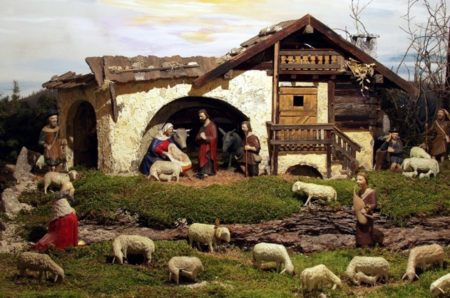 Christmas local traditions lived on almost unchanged until the Forties. The practice of decorating a Christmas tree near the Christmas crib caught on in the immediate post-war period, but this last has been at the centre of attention again and, although the creativity distinguishing the previous period was decreasing, it has found lovers yet. Around the Sixties, the village of Tesero went through a profound transformation due to the coming of a new age. The development of craftwork, the opening of new factories, the increase in tourism brought to a rapid neglect of agricultural activities and to a profound change of the whole way of living. The growing well-being in material terms and an attraction for new things made lost the taste for what was old; in this way, they threw aside and quickly neglected their old customs for the most part. Some houses were rebuilt and the old furniture was destroyed or fell into antiquarians’ hands for a penny. The very Reformation, fallen on a community in which, until then, religious practices were strongly characterized by tradition, was interpreted by a lot of people as an invite to break up with the past and came to provoke a serious mystification.

The association “Friends of the Christmas Crib”

In this context, the way to conceive and to live Christmas changed too: the religious meaning of this festival dimmed and some traditions inspired to it faded. Gifts became richer and behind them appeared the shifty figure of Santa Claus. The Christmas tree became more and more important in the houses and the Christmas crib started to be trimmed down and sometimes forgotten, if not even demolished or undersold. In 1965, the artisan and cabinetmaker Beniamino Zanon made the inspired guess to form the association “Friends of the Christmas Crib”, with the intention to en 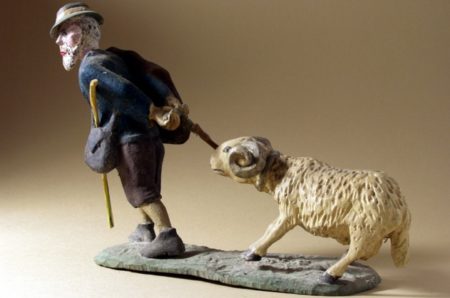 hance and enrich the artistic, historical and cultural heritage of the old tradition of making Christmas cribs in Tesero. This idea immediately turned out to be brilliant, capable of reawakening the interest of the community and of obtaining from its establishment a big attendance through exhibitions, promotional ventures and opportunities of exchange and contact with other realities similar to that of Tesero.

In the same year, in the rooms of the city hall, they put on an exhibition of twenty Christmas cribs, both old and modern, coming from Tesero, Cavalese, Pietralba, Nova Ponente, Santa Cristina di Val Gardena, San Martino di Castrozza, Trent and Naples. Beniamino Zanon took care of the exhibition to the smallest details, making most of the sets; he definitely contributed to the success of the event, which was visited by about six thousand of people and brought to the rediscovery of the value and the importance of these works at local level. In that same extraordinary 1965, within the association was born the idea of a full-scale Christmas crib to be placed open-air, in a location visible and accessible for all people.

Certainly the leader of professional sculptors was Felice Deflorian “of the Romans”, known as Felix. An artist of international reputation, author of a series of difficult wooden and bronze works, he had a particular preference for Nativity and portrayed it in a big variety of forms, always having valuable results. Member of the association “Friends of the Christmas crib”, he sculptured the figures, curated the design and watched the creation of the big Christmas crib constantly, during all its editions. The day after his death, on 28th March 2008, the association, thankful to him, thought to assure his memory through the new denomination “Association Friends of the Christmas Crib Felix Deflorian”.

The big Crib
Cribs of Tesero
Exhibitions
The tradition