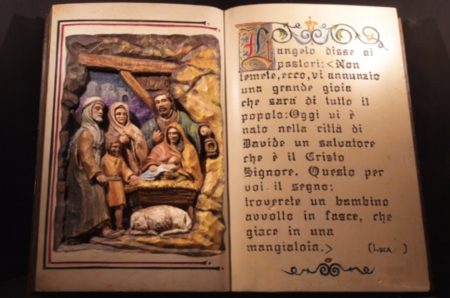 To the big Christmas crib and the marked path along the historic centre discovering a lot of Christmas cribs scattered in the ‘courts’, then, may be added exhibitions of considerable interest on the theme of Nativity. About this, there are art works and traditional artefacts coming from several countries of origin, which found recently their perfect collocation in the large basements and in the labourer’s cottage of the historic Jellici House.

A commitment not only at the local level 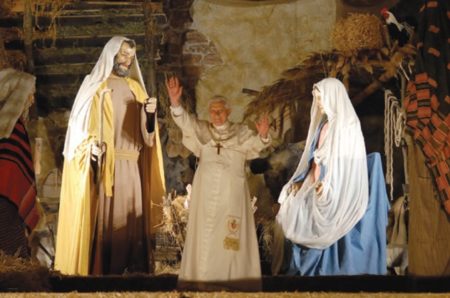 Over the last years, during Christmas, churches, squares and ‘courts’ of the town were liven up by music events, first of all, that titled “Star’s songs”. Several times, it gathered in Tesero a large number of vocal groups coming from other places in the alpine arch, where it is still alive the old tradition of young and grown-up singers who, during Christmas, go round their towns following a glittering star and singing a traditional repertoire. All these ventures attracted, year after year, a growing number of visitors and made known and appreciated Tesero’s Christmas cribs beyond local and provincial bounds, thanks to the stir and the visibility they had on press, radio and TV. From this, faraway realities interested in it, earning to the association seductive and demanding proposals for exhibitions in places considered unthinkable and inaccessible. Actually, in 2005, Tesero was at an exhibition in Mineo, near Catania, with some of its artefacts; in 2006, it was at the 13th International Exhibition of Christmas Cribs in Giffoni Valle Piana, near Salerno. In that same year and in the following one, the association “Friends of the Christmas crib” was in the Vatican and during Christmas 2008, it was in Krakow (Poland). 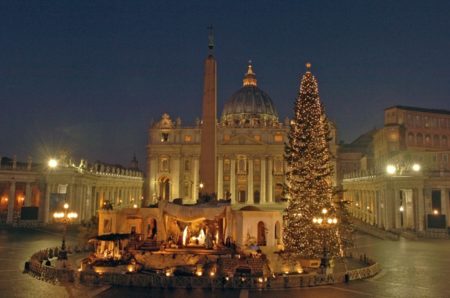 Who could have ever thought the Vatican asked for collaboration of a small association coming from a town in Trentino to enrich the big Christmas crib set in San Pietro Square in Rome? Yet, during 2006, this proposal reached the town and, after a moment of disbelief and amazement, it found convinced and enthusiastic adhesion. Having an essential support from the Autonomous Province and the Diocese of Trent, from the parishes, the cities and the Tourist Information Office of Fiemme valley, the artisans of Tesero created with care twelve figures to place beside the original Nativity still present in the Vatican. In the meanwhile, the experts of the association, under the supervision of Vatican’s architects and technicians, collaborated actively to the setting of the whole work, which was placed in the centre of the huge square in the front of San Pietro’s basilica during Christmas. The exhibition “Sweet Christ Child” consisting in 25 old Tesero’s Christmas cribs, set not faraway from Paolo 6th Hall, was added to the big Christmas crib. Pope Benedetto 16th appreciated strongly the work of the association and thousands of people visited the exhibition. The images of the Christmas crib in San Pietro Square went around the world and, together with them, the name of Tesero too, which gained deservedly a prominent position in the field of the art of making Christmas cribs. 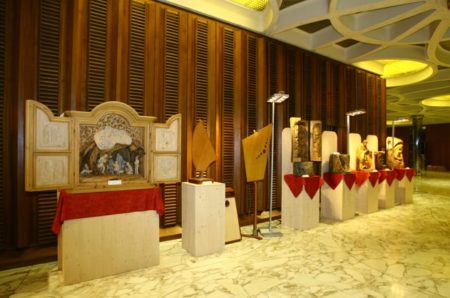 Considering the excellent result obtained in 2006, the Vatican authorities invited the association to collaborate in setting the Christmas crib in San Pietro Square for Christmas 2007 too. This time, the involvement obtained, among other things, the patronage of the Ministry of Cultural Heritage and Activity and brought to the creation of a setting particularly spectacular, thanks to the skill and the experience of the collaborators, matured in more than forty years of activity. Three new figures were given as a present to the Vatican and has become an integral part of the big Roman Christmas crib. As the year before, it was set an exhibition of Christmas cribs too, this time located in Carlo Magno’s Arm in the Vatican and visited by 70 thousand people. Moreover, during the exhibition, seven sculptors from Trentino took turns to create live as many Christmas cribs, which were sold then and whose revenue was given to charity. 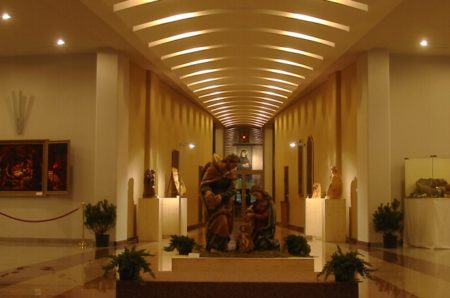 In Krakow in homage to Pope Wojtyla

During Christmas 2008, the best Christmas cribs of Tesero were shown in Krakow, in Poland, in the Shrine of Divine Mercy. Even here, during the event, some sculptors from Trentino created in situ works, which were sold then to support the Foundation Giovanni Paolo 2nd. The exhibition in Krakow represented a thankful tribute to Karol Wojtyla’s mother country. Actually, this great pope loved the mountains and visited Trentino on several occasions, showing esteem and affect for its people. In particular, in 1988, he came in Tesero to pray for the victims of the tragedy in Stava and to comfort their families during a memorable meeting.

A tradition, which allows to look forward

Two invitations in the Vatican represented doubtless the most extraordinary among the results obtained by the association “Friends of the Christmas Crib” and the lovers who, both in Tesero and in Trentino, support the ventures of the association. Moreover, together with Poland, they increased very much the prestige of the fellowship and the interest in its creations. Therefore, more frequently, they receive invitations to participate at national and international exhibitions and to show in other sites the artistic and big Christmas crib of Tesero. 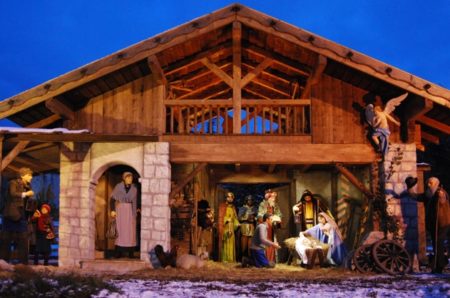 In front of these requests, to avoid of depriving the town of its Christmas crib, the association has started to think about the feasibility of a new big scale artefact, created to be moved easily and assembled where requested. In autumn 2009, this project developed through the opportunity to move the Christmas crib from Tesero to L’Aquila, where the earthquake caused death and destruction, and to locate it in the heart of the city as an act of solidarity and a visible sign of hope towards a population so strongly stricken.

The association welcomed the invitation immediately and worked for that project, which was only sketched out until that moment. Therefore, the work shaped, grew up quickly and was completed in time, thanks to not only the organization, the experience and the professionalism of collaborators, but in particular to the strong motivation animating them. 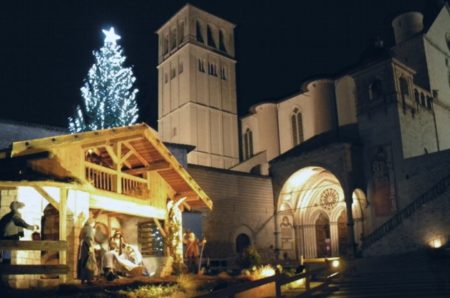 Actually, they all participated to a venture, which was worth putting themselves out, knowing that their efforts would be fully crowned by success, if they had brought a bit comfort to those who lived in sorrow. Through its presence in the Abruzzo disrupted by the earthquake, the association ended another stage of its way and it is ready to start another march, animated by the belief of carrying out an activity, which keeps its cultural value intact, despite changing times and trends. Moreover, through its creations it has simply communicated a joyful message of peace and hope yet.

The big Crib
Cribs of Tesero
The association
The tradition