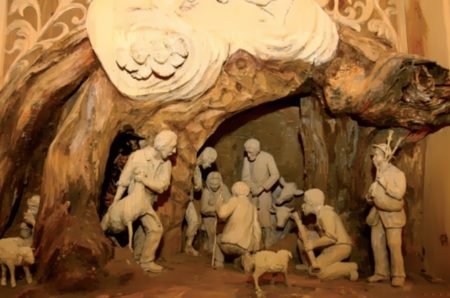 The Christmas crib tradition, which is still in use in Tesero despite the deep social, economic and cultural changes which took place in the last times, distinguishes this village from other places in Val di Fiemme and in the Province of Trento. In many houses, during Christmas time, people still use to prepare the Nativity scene, and a big crib in the open air has been staged in the centre of the village for many years; the peculiarity of this crib is that its figures and its scenery reflect the typical local tradition, and it represents for the whole community the most significant symbol for the celebrations during Christmas time.

It is probable that the tradition to set up the crib in the houses of Tesero dates back to the end of the eighteenth or to the first years of the nineteenth century even if it is impossible to defi ne precisely the exact period, and it is difficult to identify exactly the conditions which contributed to the spread of this tradition. Actually, there is not any concrete element that could indicate an earlier origin, and moreover, it is exactly in that period that in various Italian regions, and in particular in the Tyrolean area, the cribs started to arrive in the people’s houses. 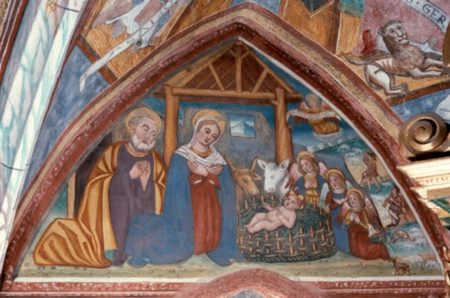 Before that time they were set up only in churches, cloisters and in the gentlemen’s residences.  However, the cult of the Virgin Mary’s moterhood and of the Nativity were deeply widespread among the population a long time before that, and they had already found expression in painting, in the plastic arts and maybe also in the carving works. Suffice it to say that there are a lot of frescoes dating back to the sixteenth century, representing the Madonna with the Infant Jesus, which decorate both the fronts of several houses in Tesero and the walls of its churches.In the lunettes of the apse in the church of San Leonardo it is still possible to see four frescoes, dating back to the sixteenth century, which represented surely motivation and a source of inspiration for the house cribs. The scenes represented on these frescoes are: the Nativity scene, the Presentation of Jesus at the Temple, the Adoration of the Magi (according to the traditional iconography, which wanted them to be kings and of different colours) and the Escape to Egypt.  Very interesting are also two ceramic tiles, which were part of a heater found some time ago and dating back to 1624, which represented the crib scene and the adoration of the Magi.

The constitution of the traditional crib 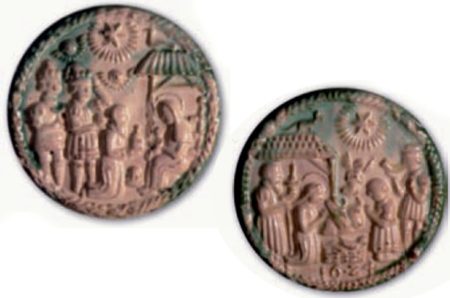 The most interesting and representing constitution of the tradtitonal cribs of Tesero, above all of those dating back to the decades straddling the nineteenth and twentieth century, provided small wooden painted statues. The statues were handmade products which had various elements of likeness towards each other, and, apart some exceptions, they clearly revealed a popular matrix, reflec

ting the features of the environment where they were produced. According to the cribs remained and to the declarations collected, it is possible to say that in those old cribs the scenery was usually very simple, and it took inspiration from the local environment, with pastures and mountains, reproduced with musk, tree bark and painted panels. But often in these sceneries people added some elements which were completely foreign, like castles or Oriental villages with palm groves, whose purpose was to evoke far times and, somehow, the landscape of Palestine. The group of the Nativity was usually put in a hut, placed in the centre of the crib, or, however, in a place that could draw immediately the attention, because that place was the most important part of the work. In the hut or on its threshold there was the Infant Jesus, laying in the manger, and around him there were the figurines of the Virgin Mary and St. Joseph, and then the ox and the ass. Over the entrance there was the angel, holding a scroll with the inscription “Gloria in excelsis Deo”. 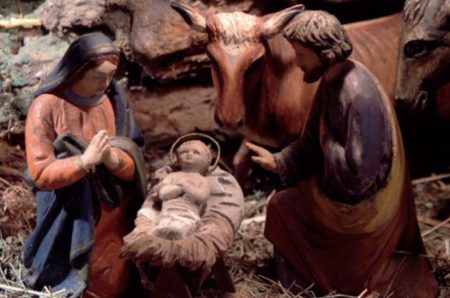 Considering that the available surface was normally large, the scene was not crowded, and it appeared immersed in a quiet and calm atmosphere. Among the cribs of this kind, only few were rich in statues; most of them included, in addition to the Nativity, not more than ten shepherds and about twenty sheep, and the Magi were not always present. Then there was also a bit of local colour, given mainly by the lesser figures, that the authors created unleashing their inventive talent, also allowing themselves some defiling licences. The shepherds knelt in adoration in front of the hut were followed by those who were walking with a lamb on their shoulders or under their arm. Others carried a sheep or a rebellious goat, while some of them put a hand on their forehead, watching from afar. There was also the piper, the sleeper and that who stood guard over the flock, holding on a stick, together with his dog. There were the old men with their flowing beards, and the young boys, still beardless. Some of them were dressed in hide, others wore a tight-waisted tunic and a pair of light shoes, but many of them were dressed like the local shepherds. The figures of women and children were rare. The three Kings wore gorgeous clothes, and they were represented while they were adoring Jesus, offering him gold, incense and myrrh; one of them always had black skin. They were followed by a small and colourful procession, composed by their servants, who were on (or accompanied) an elephant, a camel and a horse, all richly harnessed. In addition to the traditional statues, in some cribs there were also some baleful or grotesque figures, even if relegated in a corner in order not to disturb the scene. And this is the reason why it is possible to find some characters like the “ammazzafanciulli” (killer of children), who evoked the slaughter of innocents, or a wolf in the act of tearing a sheep, or other ferocious animals with a threatening look. 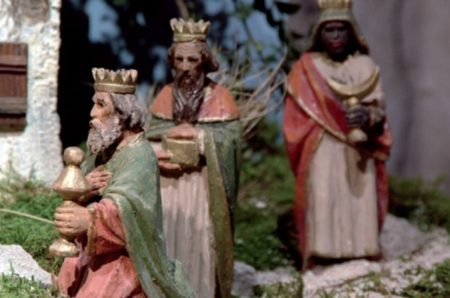 It was even possible to find the “chegadinari” (coins “layer”), the legendary character who, during those times of great poverty, everybody wished to have as friend; he was represented in the act of laying shining gold coins like eggs. Some other cribs, then, did not only represent Jesus’ birth, but they also included other groups of lesser figures, who took inspiration from the Joyful Mysteries of the rosary and the most significant moments of Jesus’ childhood, like the Annunciation, the Visit of the Virgin Mary to her cousin Elisabeth, the Presentation of Jesus at the Temple, Jesus among the doctors, the slaughter of innocents and the Escape to Egypt. While the authors were creating their works, their purpose was not particularly or mostly artistic, they simply wanted to tell, inter

pret and make topical the extraordinary event of the Christ’s birth and the first moments of his earthly existence. This is why they often got information from the Gospels of Luke and Matthew, from the apocryphal gospels, from the sorrounding environment, from their fantasy and of course from other cribs. This is the reason why some statues were taken as a model by many carvers, and then it was possible to find them in various cribs. This is for example the case of “Tita Oca”, a character representing a bent old shepherd with a lamb under his arm and a hut in his hand. 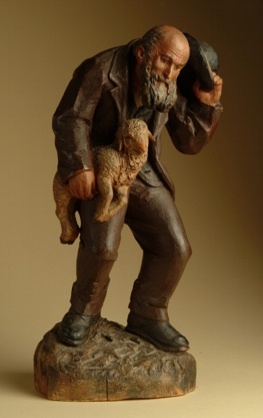 This figure was created by the wood-carver Pietro Delmarco “Stefenìn” for the crib of the local church, and following this model, many other people reproduced this character for their cribs. The figure was called in this way because he looked like an old inhabitant of the village called Tita Oca. Thanks to this continuous exchange of ideas and experiences, the cribs of Tesero started to take up some common and peculiar elements, which contributed to create a local style and to distinguish them from other cribs produced in other places.

Maybe the most interesting aspect of this tradition, from a cultural point of view, is that the cribs produced in the examined period were really many, and in most cases they were not created by professional sculptors or by specialised artisans; they were all carved by people that in their everyday lives did the most various and different jobs, committing themselves to this activity of wood carving only in this sector and for this specific purpose.

The association
The big crib
Cribs of Tesero
Exhibitions